India's infrastructure is in a shambles because of stranded capacities that don't connect with unmet needs.  Every aspect of infrastructure, such as electricity or broadband for communications, needs to be designed and executed to flow through from end to end.

The remarkable change in expectations from last May that the National Democratic Alliance (NDA) government achieved appears to be giving way to closer scrutiny based on actual performance. Meanwhile, the wait for significant economic reforms is excruciating.A couple of indicators of uneasiness: foreign institutional investors (FIIs) have turned watchful, with investments in equity and debt slowing after sustained inflows (Chart 1). 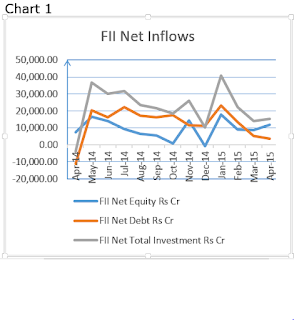 Also, while some leading businessmen have been saying everything is on track, industry credit growth is slowing relentlessly, as is to be expected when demand is muted, infrastructure is dysfunctional and credit is expensive (Chart 2). 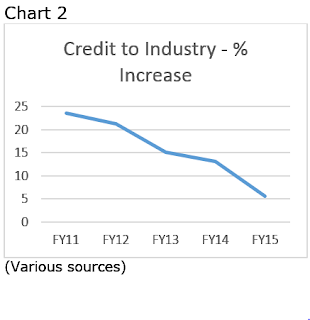 The flurry of claims, accusations, rebuttals and counter-claims about earlier growth rates dwell on reclaiming the past, with little evidence of seeking clues to generate momentum and confidence. This may be attributable partly to the curse of our times: a penchant for headline-grabbing or headline-making. There is scarce interest in less flamboyant, fact-based presentation - whether it is politicians, TV and print media, or the audience, the general public. This may also be partly attributable to inept communication, a malady that seems to plague this regime despite its vaunted communication skills as much as it did the United Progressive Alliance (UPA) before it. Perhaps the Web can be better used to not only organise and coordinate within and across ministries, but also to disclose information while building convergence and confidence.
Consider some points that stand out from the clamour. One is that insufficient attention is directed towards cohesive policies, processes and institutions. On the face of it, there do appear to be several efforts at policy reform, for instance, in land and labour legislation, as well as in judicial reforms. There are critiques, however, suggesting that these stand-alone efforts suffer from insufficient resource allocation and ineffective implementation.1 The implication is that there is an absence of overarching vision and flowing from that, a lack of direction and integration.Are constructive alternatives possible?
Last week's observations by former NDA minister Arun Shourie highlighted this apparent lack of vision, and how the government seemed to be dealing with the many problems like pieces of a jigsaw puzzle without an appreciation of the big picture. For example, the government's actions relating to coal and spectrum auctions are merely in line with court orders. There is no apparent effort to develop constructive alternatives in the public interest.From a societal perspective, surely the government, the courts and the public need to ask: for whose benefit and at what cost? For instance, how are upfront government revenues from auctions beneficial to the public if they result in non-delivery or a slowdown of requisite services, compared with much larger collections over time from enterprises that deliver services after criteria-based allocations?Note: revenue sharing can also be transparent. For transparent allocations, one alternative is to draw up technical and financial shortlists with integrity, followed by a lottery (with equal integrity). Another possibility is merit-based, open criteria judged by individuals with understanding and integrity - as was done to affect a breakthrough for land acquisition for the Calcutta Metro in 1982 and for part of the Bengaluru Metro in 2006. Both were achieved effectively without controversy by officials (or, to use the customary pejorative, "bureaucrats") entrusted with the responsibility. These individuals could be consulted.Cohesive Leadership

An elephant in the room is the NDA's socially divisive stance. If the goal is high achievement, the need for convergent effort from our diverse, vast population is a no-brainer. Strong leadership resulting in cohesive effort is essential. The misgivings created so far must be addressed and reversed. If not attempted now, it will be a tremendous opportunity squandered.There will be, of course, many impediments to achieving convergent efforts. And the dissonant legacy structures - such as realigning the judiciary and executive to constructive engagement, a constructive welfare net in place of Mahatma Gandhi National Rural Employment Guarantee Act, formulating truly beneficial policies for our needs instead of aping detrimental auction models - will be difficult to replace.It is likely that we will continue in our shambolic ways, depriving ourselves of the gains of organisation and productivity. Yet there is the tantalising possibility of great gains if we were to have the right leadership, and if we could ourselves rise to the occasion.

Another elephant in the room is our atrocious infrastructure. Successive governments and all parties have foundered on this. Empty talk of "second-round" reforms and so on betray a complete lack of understanding of the elements of essential, enabling infrastructure. At the most basic level, electricity, communications, transport and logistics, water and sewerage/waste disposal are fundamental requirements for productive living. These must be the relentless focus of end-to-end delivery systems.

The reforms in power and communications since 1991 were encapsulated sub-processes, as in Chart 3. Each of the boxes is a complex process in itself, and

each has its position in the process flow as shown. Electricity reforms relate to fuel, generation, transmission, distribution and cash collection. Unless all steps in the chain are completed, we will be left with stranded capacities in one or more of these "boxes", like stranded generation plants, as we have been so far.

For broadband communications, the areas are the access, aggregation and the core or backbone networks. The most difficult are the last-mile links in access networks. Elements like the National Optical Fibre Network (NOFN) backbone are stranded unless they are connected with aggregation networks that lead to last-mile access, which could be a wireless, cable, telephone wire, or an electricity link. The system must be designed in its entirety to deliver.What began the information technology services revolution was facilitating every link in the chain from one end to the other, with permissions, incentives and tax cuts, even if it was only a "thin pipe", 64 kbps link that bypassed initial hurdles for a start. The government could consider variants that could work for each infrastructure sector.