Digitisation and democracy are ruled by the ineluctable dynamics of networks.

There’s no escaping the blessing or the curse of the Digital Age in India, any more than the benefits and challenges of democracy. The headlong rush into digitised networks provides incredible benefits of reach and efficiency in many different ways, at the individual and many collective levels — of family, friends, community, nation, polity, work, domain, and so on. It also lends itself to the dark side, plumbing the depths of social, religious, or political factions and tribalism, bigotry, autocracy and fascism, anarchy, social dysfunction, and the rest. Yet, there’s no denying that for India, with all its needs, talents, foibles, and contradictions, digitisation is a great enabler.


Likewise democracy.  Romanticised notions of it are pure fluff, epitomised by selfies at the Parthenon, conjectures about Vaishali, or the spectacle and pageantry of electioneering. The reality was, and is, much harsher, whether then or now. Then, it was the practice of a pri­vileged elite. Now, the reality of de­m­ocracy in India with universal franchise and an insufficiently prepared polity is a space captured by politicians, many of them fractious opportunists, not really prepared or equipped for the complex analysis and decision-making that governance requires. Mo­st citizens, however, have an illusory freedom of choice, despite the choice being restricted to accepting or rejecting incumbents, or choosing repla­cements from among th­e­se very politicians. This is where digitisation has a direct role and enormous impact through media in all its forms, in­cluding the nexus between money and politics as in the Cambridge Analytica episode.

According to McKinsey’s ‘Digital India’ report of 2019, the benefits of digitising India are impressive, although only 40 per cent of the population has internet access, and there is uneven adoption in businesses, leaving considerable room for improvement. Yet, newly digitising sectors have experienced tremendous gains. For example, in logistics, fleet turnaround time has been reduced by 50 to 70 per cent, and digitised supply chains helped companies reduce inventory by 20 per cent. The question is whether and how this can be managed to yield more benefits than detriments, while preserving privacy, social convergence, and harmony, while avoiding divergence, repression, and instability through disharmony.

The Imperative for Conscious Regulation
Network science tells us that real-world networks share two characteristics. The first is growth with time, and the second is that new nodes link more often to more connected nodes, or hubs. Growth and preferential attachment result in the emergence of a few, highly connected, dominant hubs in all networks, whether the networks are of the cells in our bodies, computer chips, transport networks for airlines, social networks connecting people, or the World Wide Web. These characteristics are common across networks of any size and are scale-free.
Added later: June 7, 2019
[Re the scale-free aspect, for opposing views, see: liorpachter.wordpress.com/2014/02/10/the-network-nonsense-of-albert-laszlo-barabasi/]

Added later: June 15, 2019
[Scale-Free Networks Are Rare-Anna D. Broido and Aaron Clauset-arxiv.org
https://arxiv.org/pdf/1801.03400.pdf]
The dominance manifested by companies such as Facebook, Amazon, Netflix, and Google, combined with the attenuated influence of less connected nodes highlights the role of regulation and structure for equitable development and outcomes in networks. The same issues of dominance and the need for regulation arise in democracy.  In India, outrageous changes introduced recently with regard to election funding have increased opacity and the potential for abuse at the heart of democratic processes. Political parties can now receive foreign or do­me­stic funding from any source without constraint, and funds can be anonymous through ele­ctoral bonds. Introduced with retrospective effect, both the National Demo­cratic Alliance and the Congress benefitted, as previous adverse judgments were nullified. Therefore, one pointer is the need for regulation and appropriate controls applied in a host of areas including news and social media.
Evidence-Based Policies
An entirely constructive aspect of digitisation relates to the application of network science to issues by mapping the links between factors and actionable policies. Examples are the connection between genes and diseases for effective treatment,1 or the feasibility of upgrading products and exports for countries. An example of how proximate products and exports developed over 20 years is visualised in Chart 1, showing the Revealed Comparative Advantage (RCA) of Colombia (COL) and Malaysia (MYS) in production and exports from 1980 to 2000. 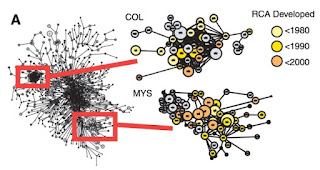 The premise is that most upscale products are from a densely connected core, while lower order products are in a less connected periphery. Countries tend to move to products close to those for which they have specialised skills.
The lower chart is for Malaysia alone (it helps to view enlarged images in co­lour on a screen to trace the progression).

India’s manufacturing and export opportunities in its product space in 2017 are in Chart 2.

Such interactive charts are available and can help in planning for product areas such as automobile parts, chemicals, or electric motors.2
A great deal of appropriate regulation followed by planning and execution is needed, incorporating insights such as these in areas like governance, healthcare and industrial policy. Realpolitik and preoccupation with obscurantism, religiosity, and caste/tribe, require that changes be driven by unraveling the nexus between politics and funding, evolving a transparent, state-funded system. Is such a transformation possible? Recent developments that have overtaken earlier attempts at electoral reform such as the Goswami Committee (1990) and the Vohra Committee (1993) emphasise an urgent need. But can public opi­ni­on and opportunistic opposition interests converge to effect appropriate cha­nges in political funding? And elicit enlightened government action in public interest projects for health, manufacturing and export policies, agriculture, finance, construction, and so on? A tall order. Perhaps the best hope is that reactions to phenomena such as Brexit help create more equitable practices.
Shyam dot Ponappa at gmail dot com

Posted by Praxis at 7:09 AM No comments: