Share infrastructure and spectrum, and adopt revenue-sharing for growth.

There’s little doubt our economy is facing a slough of problems, including misdirection and loss of momentum. Apart from the present government’s doings or omissions, other legacies have also contributed to this, such as the complacency of previous governments, the scams, the obduracy of the then Opposition, resulting in the attrition of parliamentary processes, and so on. This, followed by the persistently divisive approach of the incumbent government has effectively scuppered any possibility of convergent societal efforts. There’s no point attributing blame for the purposes of redeeming the situation. Instead, we must try to pick up the pieces.
Some things need doing, and urgently, but we (and especially our governments) seem to be avoiding them. Basic infrastructure is our most urgent need, apart from unifying leadership and social institutions. Certain systemic bases simply must be built and made available to organise and channel energies into constructive, productive activities and well-being, although it will be time-consuming and far from easy on our continental scale.
In infrastructure, broadband can yield the quickest and highest rewards (e.g., http://organizing-india.blogspot.in/2010/10/broadband-for-education-training.html) by adopting policies that enable responsible access to existing resources, instead of continuing with self-imposed administrative restrictions. Everything else — energy, water and sewerage, and transportation — is more complex, and needs far more capital investment and organisation. What’s more, with good communications support, other infrastructure becomes easier to build and manage. On the face of it, the government seems to be addressing this. For example, an Inter-Ministerial Group (IMG) was formed three months ago to recommend solutions for the debt-laden telecom sector. Interim reports did not augur well, though, suggesting there was no need for major policy changes because of signs of recovery. Unfortunately, the IMG’s final recommendations are on the same lines: Deferring spectrum and licence fee payments from 10 years to 16 years, and reducing interest charges by about 2 per cent. However, there is no reduction in licence fees or spectrum charges nor easing of spectrum limits on consolidation; interconnection charges will be decided by the Telecom Regulatory Authority of India, and spectrum auctions will be after April 2018. But for an overleveraged, hypercompetitive sector, deferring the massive capital requirements for auctions by some months and other proposed measures doesn’t really change the game.
Will this enable the telecom sector to recover? Many operators and observers think not, including yours truly. The reasons below leave one wondering whether the IMG made their recommendations with full knowledge, or were not fully cognizant of the realities.
Why major changes are necessary

There are compelling reasons for radical policy interventions. A report by Strategy& (formerly Booz and Company, now part of PwC) suggests that telecom operators in developing countries have negative margins on data services (see chart). 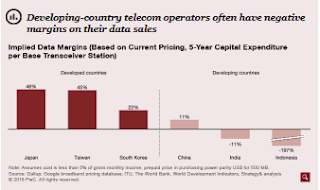 This is significant for India (a) because we need considerable growth in networks and delivery, (b) that is affordable, (c) yet sustainable, i.e., generates positive cash flows.
The reality is that the already troubled sector’s revenues fell steeply after Reliance Jio’s entry in 2016, and so did government revenues from licence and spectrum charges. Yet, having upended the sector’s finances, Jio paid only Rs 47.81 crore as licence fees and spectrum charges for the six months ending June 2017, or less than 1 per cent of total operator payments, since it had minimal revenues. By contrast, Bharti Airtel paid Rs 2,902.75 crore, Vodafone Rs 2,005.25 crore, and Idea Cellular Rs 1,677.67 crore. The sector is being severely weakened by this strategy as revenues and government collections collapse, resulting in deficient infrastructure.
While high government revenues alone are the wrong criterion for telecom policies, this shows how the sector’s finances were gutted, and the likely reality going forward. A recent report by Standard & Poor’s (S&P) expects revenues to fall up to 10 per cent for the year, with the sector settling down over 12-24 months. But that is merely one surmise; the certainty is of continuing damage to the market’s ability to sustain itself, as well as the reality of reduced operating revenues and government collections.
These disruptive practices are hollowing out industry capacity, whereas the country’s need is for more capacity to be built for broader and better access, given under 300 million data subscribers. Adequate network access needs to be built up in underserved areas, and appropriate content and linkages have to be built for the full range of user needs covering education, health, and entertainment through government and commercial services.
Only the government can develop appropriate policies and regulations, including levying no more than reasonable charges (high government charges have constrained India’s communications development). After the sector stalled in 1997-98, there was a partial remedy by the National Democratic Alliance through NTP-99, substituting a revenue-sharing arrangement for fees owed through auctions. The government’s share was initially too high, but as it was gradually reduced and as competition increased, mobile telephony grew explosively, as did government revenues (see: http://organizing-india.blogspot.in/2017/04/facts-not-beliefs-should-drive-policies.html).
For a similar explosive surge in broadband economic revival, we need policy decisions urgently that:

a) Adopt infrastructure sharing fully to reduce costs. Do this through two or three consortiums to have competition, with government entities anchoring each. For instance, 70 per cent of Sweden is covered by a shared network between Telenor and Hi3G, which is shared outside the major cities. For shared networks, equipment is readily available to support multiple operators; we need the enabling policies.
b) Approach spectrum as a shared public resource. For assigned spectrum, allow licensed operators and manufacturers/developers secondary access (primary holder retains priority), at reasonable revenue-sharing charges, without up-front fees. Start with unused or under-used frequencies such as TV White Space.
c) Allocate spectrum for Wi-Fi conforming to global standards to benefit from ecosystems, e.g., 5 GHz and 60 GHz.
This will enable maximum utilisation of spectrum and networks for the common good, instead of artificially restricting access as is the practice today. We will all benefit greatly from better networks and services, and government revenues will exceed any conceivable auction fees.
Shyam (no-space) Ponappa at gmail dot com
Posted by Praxis at 1:37 PM No comments: