Despite the PM's interest, much remains to be done.

There's a buzz about Digital India again with an Indian PM finally reaching Silicon Valley. So are we close to broadband taking off, or is this just more hype?The announcements are certainly promising. For instance, that Indian Railways will provide Wi-Fi services at 500 railway stations over the next few years. Google's support tendered by CEO Sundar Pichai offers new hope that this will happen. Other promising announcements include Microsoft CEO Satya Nadella's announcement of cloud-based services from India, and connectivity at the village level through TV White Space (unused broadcast spectrum), and Qualcomm CEO Paul Jacob's $150-million fund for start-ups in India.There have been announcements like these before. For instance, the Railways announced Wi-Fi projects for years, with modest achievements. For details, see "A history of Wi-Fi and Indian Railways from 2006 to Infinity (maybe)".1
What's troubling is that in terms of ground realities, except for TV White Space for broadband, there's little evidence of a systematic approach to problems besetting communications, and changes in policies to solve them. Everyone seems carried away, and this is as true of most of the media and the commentariat as it is of the politicians. But informed, systematic efforts at solutions are absolutely essential to achieve these aspirations.Take the ingenuous comparisons of Silicon Valley with Bengaluru, with the latter being described as "nearly there". Such election rhetoric from former US Senator and Secretary of State John Kerry is one thing, but our savvy media folk should know better. People who visit Silicon Valley from India, or those who are based there and occasionally visit India, can't be blind to the stark differences. One is a place where the basics related to living and functioning effectively actually work well; the other isn't. One has potholed streets with garbage, decrepit or nonexistent sanitation, and chronic power cuts; the other doesn't. It's as simple as that.This leads to another observation that's tossed off too easily, about less need for government. Blithe statements that government needs to be reduced, or to get out of the way and let the private sector function, are often made with apparently little understanding of what governments do before getting out of the way. Those essential services in Silicon Valley and elsewhere that function seamlessly and are taken for granted? That's what governments can do. In other words, that is government's responsibility: to provide, apart from security and law and order, the infrastructure services and organisation of communities, markets and financial systems that enable citizens to function effectively and live well. Yes, markets are indeed planned and structured in order to function well.

The data on broadband at the end of 2014 in the Broadband Report 2015 by the ITU and Unesco suggest that India is not doing too well compared with its developing neighbours in Asia (see chart below).2  Our leadership and government need to confront this reality, and apply themselves to reforms to improve conditions. Broadband subscriptions as a percentage of our population trail most countries, and the percentage of individuals using the Internet is at the bottom of the pack, with Myanmar, Bangladesh, Pakistan and Nepal. 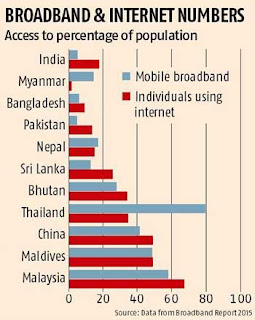 To make Digital India a reality, here's what the government needs to do:

This is the work that now needs to get done: accept the reality of our infrastructure deficiencies, change our spectrum and network sharing policies, plan step-by-step, and execute for results.