The productivity bottled up in assets in this country is mind boggling. The catch is that to be unleashed, the systems in which these assets are embedded must function effectively.
Take the road network. A study of Delhi-Mumbai truck traffic by Indian Institute of Management, Calcutta (IIM-C) and Transport Corporation of India in 2012 reported an average speed of just over 21 km per hour. Of 18 stops, 16 were to pay tolls manually with average delays of 10 minutes, constituting 80 per cent of total stoppage time. The study estimated that delays cost the economy Rs 27,000 crore ($5.5 billion at the time), with the additional fuel consumption estimated at Rs 60,000 crore ($12 billion at the time).The Indian Highways Management Company Limited, set up in 2012, was tasked with implementing electronic toll collection (ETC) systems. It began with ICICI Bank, then added Axis Bank. ETC was introduced on the Delhi-Mumbai expressway in 2014. A dedicated ETC lane across the country was to have been completed by 2014, then 2015; perhaps it will be ready in some months. But for full efficiency gains, the entire traffic flow needs ETC, not just a small segment. Also, anomalies such as the unwillingness of sections of the populace to pay tolls, or for political parties to exploit these tendencies, will need to be "sorted out". In effect, similar criteria will operate as in electricity distribution networks: Users must either pay for services - directly or with the help of subsidies, or forego infrastructure services of reasonable quality. If there is no enforcement of rules (quality service-supply and payment-collection), there will be a shoddy mess.The underlying expressways already exist, but installing these systems require effort and investment. Imagine the productivity gains and reduced pollution if vehicles going through over 370 toll plazas in India don't have to stop, wait for 10 minutes on average to pay tolls, then accelerate back to cruising speed.

Inter-City Road Network Organisation
An important feature of the way road networks are organised and managed is the concept of common-pool resources, i.e., all public roads that do not require special tolls are part of a common pool, and are accessible to anyone who pays road taxes for the vehicle used. Another strength is that controlled-access roads with tolls connect to the rest of the road network. (There are negative aspects such as state registration, whereby states collect high fees for re-registering a vehicle on a change of domicile, but our focus here is on strengths.)

Extending Similar Concepts to Communications
Now consider the infrastructure network of the communications system. Why don't we apply these beneficial aspects of operating our roads, namely, common-pool resources with access charges, to communications? There are several reasons, since transportation and communications have evolved in different ways. While they are customarily treated differently, these legacy issues can be resolved.In communications, spectrum bands were separated into one lot for broadcasting and another for telecommunications, which began with voice and now extends to data. Concerns about anticompetitive dominance in the US led to spectrum auctions in the 1990s, initially to prevent concentration of power in the hands of press barons-cum-broadcasters. The emphasis changed, however, to embellishing government treasuries, barring exceptions as in the public-spirited Nordic countries, Japan,1 and China. In India, events following the 2G scam and a war-of-attrition death spiral in politics have resulted in a paroxysm of righteous inability to take a long-term view, which is a prerequisite for making constructive policy choices. But, as the economy stalls and dark days loom, perhaps the political and administrative leaders will muster the courage to understand our predicament and find a way to get off the beaten track leading to a morass.
We have economic uncertainty, a burgeoning working-age population that could either contribute to supply-and-demand or to disorder, high interest rates, and a heavily over-leveraged communications sector. The indebtedness is aggravated by previous spectrum auctions and constrained reach. Inadequate connectivity limits not only opportunity, but service provision and revenue potential.The sector's urgent need is for more spectrum at less cost. More countries are pooling communications infrastructure including spectrum. Australia, Denmark, Spain, the UK, Sweden, and latterly, Brazil, Colombia and Mexico have different levels of shared infrastructure including spectrum (see chart below).2 Mexico is deploying a countrywide wholesale network using 700 MHz (megahertz). In India, restrictive regulations hinder effective spectrum sharing. 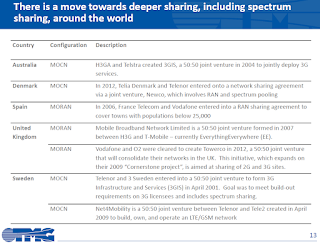 “In Latin America passive sharing has been the preferred approach, with Tower Cos. playing a key role…” 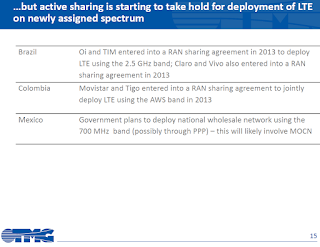 
Studies by Columbia University and the Indian Institute of Science affirm that pooling infrastructure can maximise total returns as well as for individual operators, while users gain enormous benefits.3,4 The studies' apprehensions, regarding trust, willingness to cooperate, and transparency, would not arise if there were mandated pooling through consortiums of operators and the government, and charges based on metering.
A change in regulations alone could mandate that all existing spectrum and networks be freely shared for roaming, depending on capacity and efficiency. Second, unused spectrum, for example, in the 500-800 MHz band, could be made available for secondary sharing to operators paying for metered use. Shared control in consortiums, including the government, would ensure transparency. Similarly, government spectrum could be secondarily shared. Tax collections would increase with additional revenues, as they did dramatically after 2003, when reasonable revenue-sharing rates were introduced for licence fees. USO funds could subsidise rural delivery where necessary for ubiquitous access.Instead, if we continue with auctions, the 700 MHz band where range and penetration could reduce costs by 70 per cent may remain untouched, because a countrywide five MHz block could cost Rs 55,000 crore, almost a third of industry revenues.