Only the Supreme Court can rectify spectrum management in line with other resources, but all stakeholders can contribute

Last week, the department of telecommunications initiated another spectrum auction, as directed by the Supreme Court. The auction of 800, 900, and 1800 MHz is to end in March. The winners, if any, must pay in 10 days a third of the amount bid for 1800 MHz, and a quarter for 800 and 900 MHz.

If there are high bids, why should it bode ill for communications services for education, training, health care, commerce, and for future productivity? Because many years must pass for the results to show.

Fallout of auctions: many years away

The expiry of 900 MHz rights starts from December 2014 in Delhi, Mumbai and Kolkata; others will do so only from 2016-2024. The table shows the assignments in each circle, and the market share of revenues in July 2012. The colour of each cell indicates the expiry period.

The first assignments of 900 MHz spectrum to private operators in Delhi, Mumbai and Kolkata expire in November 2014. The second will take up to five years longer, ie, from 2015-2019, eg, Andhra Pradesh, Gujarat, Karnataka, Maharashtra, Vodafone in Tamil Nadu, etc. The third will take even longer. Hence, forcing auctions does not provide a near-term solution.

Operators with more spectrum or access to more bandwidth can offer higher capacity and data rates at lower cost. Operators try to get as much spectrum as their competitors, because having less spectrum means deploying more cell sites for the same capacity, which means greater capital cost. Hence, in India, pooling and sharing spectrum among operators – providing greater bandwidth dynamically to each operator on demand – will result in better coverage and higher capacity at lower cost. If operators pay only for using the spectrum on demand and do not incur high costs to acquire spectrum rights, they can invest more capital in the “superstructure” of their services, while maintaining lower tariffs. Acting in the public interest, the government should, therefore, keep spectrum costs low for better coverage and services at lower prices. If informed by knowledgeable, unbiased experts, the Supreme Court is likely to accept this conclusion.

The Supreme Court upheld these principles for natural resource allocation on the Presidential Reference. The reference excluded how spectrum should be assigned. A logical extension of these principles requires that spectrum assignment, as for other resources, is for governments to decide. 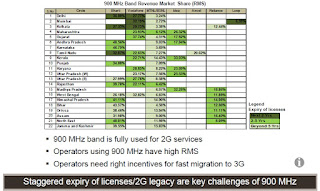 Spectrum sharing
Developments in spectrum sharing augur a new, collaborative approach, and a change from exclusive rights apart from unlicensed spectrum for Wi-fi. While spectrum sharing was pioneered by the US and the UK, it is being pursued widely, as in trials in Finland for the European Union, and in Singapore, Japan and Korea in Asia. Shared spectrum standards under development for years are now coming to a head. Standards can lead to large volumes resulting in low prices, as for Wi-fi.

An approach to corrective action
There is an inspiring example from Bihar of how such issues can be addressed through concerted action by stakeholders. The example is from the districts where the Bill & Melinda Gates Foundation works on mother and child care. Something amazing has apparently happened: the various agencies are collaborating, whereas they worked in silos before. Auxiliary nurse midwives, anganwadi workers and accredited social health activists (ASHA) are co-ordinating their activities to achieve better results. There’s a communications angle, too: five major operators (Airtel, Idea, Tata, Reliance and Vodafone) have partnered with the Foundation and reduced tariffs to make their services affordable2.

There is something that stakeholders can do for spectrum (the honourable judges, DoT, the Telecom Regulatory Authority of India, other agencies, operators, and independent experts): they can bring their expertise and discretion to bear for beneficial solutions. These may include short-term steps, like more 2.1 GHz to create a pan-India 3G network instead of the CDMA 19003 MHz, apart from exploring possibilities for more unlicensed bands, and other forms of spectrum sharing.