It's time the government accepts that current policies are not enough to bring about Digital India.

Shyam Ponappa   |   April 7, 2016
It helps to remind oneself of the scale of Digital India, its magnitude and sweep: to provide e-governance and other e-services everywhere, including 250,000 gram panchayats serving another 400,000 villages. That includes all the backbone and aggregation networks, and institutional processes to get there. The links indigitalindia.gov.in, such as http://www.bbnl.nic.in/, illustrate what's involved - and because many users are from households, the demand is for even more extensive networks.The menu of services through Internet access is ambitious, and includes government services, health care, education, market information, financial services and so on. But it's the lack of basic access, of the "pipes" and "plumbing" for connectivity, that's the first, most difficult, yet essential step. Until this aspect is in place, getting results in areas such as efficient delivery of electricity, e-governance - including subsidies, education and skills, health care, manufacturing, and so on - is very much more difficult.These services make up a robust wishlist, although their commercial underpinnings have yet to be designed and spelt out. As regards delivery, significant policy developments were reported last week. The Telecom Commission approved the operation of virtual network operators, allowing for operators who don't own networks or spectrum. They also recommended lowering spectrum usage charges from five per cent to three per cent of Adjusted Gross Revenues, while the exception of one per cent for Broadband Wireless Access spectrum continues. The bad news was in the Budget for 2016: service tax of 14.5 per cent on spectrum acquisitions, including through auctions.But these are simply not enough. It's time the government accepts that Digital India is too distant, and they'd better formulate corrective measures. For example, even after 10 years with some success in setting up Common Services Centres (CSCs) in parts of the country, there doesn't seem to be a replicable template with sufficient momentum for ubiquitous connectivity. Worse, urban services remain constrained by too little spectrum that costs too much, with many impediments to augmenting capacity.Consider factors affecting execution and delivery.First, there's the telecommunications industry in its current beleaguered state. Its constituents have their backs to the wall for various reasons:
For local manufacturers, the competition from global vendors is formidable if not overwhelming, given their advantages of ready access to capital, tax breaks, state sponsorship, established products and markets, and relationships. Access to spectrum will enable development and testing of devices, which is very difficult under present circumstances, but local manufacturing also needs entire ecosystems.
For the government, there's an overriding imperative for revenue collection. The motivation is an unrelenting need for (legitimate) expenditure on infrastructure, governance, and basic welfare in a developing economy. This is compounded by execution on a massive scale that also involves changes in user behaviour, for instance, village institutions like CSCs that have yet to take root. Another level of complexity is because two-thirds of users are from non-urban areas requiring extensive wireless broadband, untested for rural delivery except for satellite television.With the public and media suspicious of government and industry, resolving these aspects is more difficult because of their skepticism and opposition. There's a disinclination to evaluate policies objectively because of recent scams. It is increasingly obvious that plugging away at legacy plans with their failure rate won't do, and more effective ways must be framed to achieve connectivity. For solutions acceptable to the government, to service providers, and the public, essential criteria are transparency and fairness. Next, the approach must be practicable, yield reasonable government revenues, and have reasonable profit potential. All these elements are required for sustainable initiatives. Every step has to be thought through, with all government departments working together (another big ask) and with industry, from the basic strands: connective links, sustainable equipment at reasonable cost, and revenue streams (whether from user payments or partly from subsidies) for services and content to more than cover those costs. 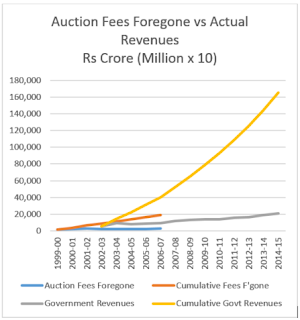 Recognising this reality, it's time to frame breakthrough policies, encouraging service providers to increase broadband reach to cover suburban and rural users, and to provide content that they want. Ways to do this include:

As rural areas are not densely populated, the availability of spectrum is not a constraint as in urban areas. Using this approach, devices being tested in trials by the IITs and ERNET, if satisfactory, can be used for both TV-over-the-Internet as well as for broadband. This will enable Doordarshan and others to provide Internet access to archival content, and to current and future programmes. Consortium approaches to organisation and revenue sharing have to be developed as part of the solution. If shared on a secondary basis (ensuring primary access to Doordarshan when required), this approach can be adopted for unused spectrum for an interim period of some years without changes in allocation, to give it a chance to develop before taking stock, with reduced spectrum fees and/or incentive payments for seeding rural markets.If the virtual network operator idea is extended to full sharing of networks including secondary sharing of unused spectrum for a fee to owners, future network investments will be rationalised, and capacity utilisation of networks and spectrum will likely become much more optimal.

Shyam (no space) Ponappa at gmail dot com
Posted by Praxis at 10:39 PM