A Pathfinding Approach for Digital India

It's not only the installation of the OFC, but of ensuring quality and reliability.


Most people believe an optical fibre cable (OFC) connection is necessary for broadband. While largely true, this is often financially viable only in urban agglomerations. What is less known is that trading companies use wireless links between New York and Chicago for high-speed electronic trades [1]. For people outside urban clusters, wireless is a less expensive alternative to fibre. They get only a few megabits per second, but realistically, ubiquitous broadband at 2 Mbps would be great.


Three factors are driving internet access and usage in India. An overriding factor is the growth of wireless devices and traffic as a global phenomenon. Cisco estimated in June 2016 that in 2015, wired access comprised 52 per cent of IP traffic, but would reduce to one-third by 2020, while wireless access would increase to two-thirds. This trend is reinforced by another factor: Innovation that lowers costs and improves performance in mobile wireless (Chart 1). 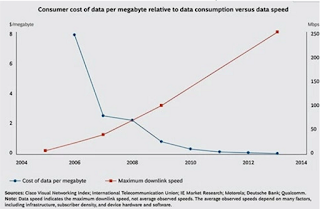 The third factor is the combination of the geographic spread of our population, the concentration of broadband penetration (Chart 2), and the limited coverage of OFC networks. While major cities and their connecting links are covered by OFC, less populated and less commercially attractive areas between them are not.  In hilly terrain, there is considerable difficulty in laying OFC, which extends far beyond cost.  In urban areas, cost can be a deterrent because we lack reasonable, uniform charges for rights-of-way. Such procedures and practices are difficult to institute and enforce, but are essential for robust, viable OFC networks. 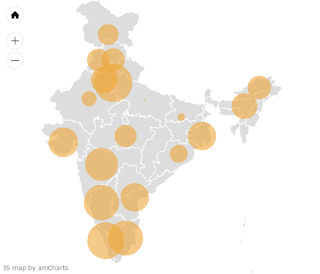 It's not only the installation of the OFC, but of ensuring quality and reliability. OFC networks in India apparently suffer from 12 to 14 cuts per km per month, whereas the international benchmark is 0.7 cuts per km km per month. Apart from more frequent repairs, the capital expenditure in India is nearly three times as high as in Australia or the US. [2]
Estimates for installing OFC using standard procedures vary from about Rs 1 lakh to Rs 4 lakh per km. However, there have been attempts at getting costs down by radical changes in approach. For example, Andhra Pradesh considered an OFC installation of 22,500 km estimated at Rs 4,700 crore. By stringing fibre overhead along electric cables, however, the estimate was cut to Rs 333 crore, reducing costs from Rs 21 lakh to under Rs 1.5 lakh per km. It remains to be seen how this network will perform in terms of quality and reliability. Also, wireless technology is needed to extend connectivity from the fibre to villages, and cellular network costs rise with less bandwidth. For instance, one estimate is that excluding spectrum costs, a network using 5 MHz costs nearly 70 percent more than using 20 MHz.
For all these reasons, we need concerted action to redesign our approach to broadband, covering the fundamentals of infrastructure, spectrum and market design.  The exponential growth in mobile services has reached a plateau, and is complicated by the taint of the 2G spectrum scams. This has resulted in a mindset combining witch-hunting and paranoia in the press, the public, government departments, and the judiciary. This is not conducive for the coordinated, collective strategy and action that is required to extricate ourselves. Several proven wireless technologies are not permitted in India, although the Telecom Regulatory Authority of India has recommended their use. Methods to increase connectivity like those listed below are urgently needed, with requisite environmental safeguards such as the use of renewable energy.
Additional steps, e.g.:


It is evident that despite intense efforts by the people involved, our existing approach is simply not getting us to where we need to be. This has been repeated by government and private sector representatives many times. There’s no substitute for developing a sound approach, collectively and participatively, with professional facilitation, cutting across government, industry (operators and equipment providers), users, and the judiciary, to devise whatever solutions will deliver better results.  We have to move away from adversarial deadlock.


A good way to begin is by accepting facts, and considering the evidence before dismissing points of view. For licensing, we know that government collections from revenue sharing far exceed the auction fees foregone (“Breakthroughs Needed for Digital India”). We have the experience of building other infrastructure such as roads and airports on revenue-sharing principles.  We have to take a similar systematic, phased approach to designing and implementing broadband networks. Policies on infrastructure resource use including spectrum need to be rationalised, and the sector organised through participative path-finding and problem solving.  We have to build national champions in manufacturing to keep costs affordable, for instance, using TV White Space. India could set the standard with its IPR and products where OFC is infeasible or unviable for connectivity to villages and rural clusters. Both the administrative and political leadership need to do this, working with all stakeholders, and not treating any of them as adversaries, or cronies.
Shyam (no space) Ponappa at gmail dot com

2. Conference presentation, Sterlite, http://www.trai.gov.in/sites/default/files/Sterlite-Badri.pdf
Posted by Praxis at 11:31 AM