Facts, Not Beliefs, Should Drive Policies

We see what we believe, so for policies that lead to solutions, policymakers need to apprehend facts as objectively as possible.

We have a number of seemingly disparate economic problems that defy resolution. These can appear to be unrelated, such as languishing bank loan recovery and growth (excluding those attributable to corruption), glaring deficiencies in telecommunications services, while there’s supposedly an abundance of spectrum as well as unmet demand, a juxtaposition of power cuts with overcapacity in electricity generation amid reports of “lack of demand”, and so on. One reason for this is unintentional biases in perception that result in ineffective or even obstructive policymaking. Here is an explanation of the underlying condition, with examples.


The basic malady is “confirmation bias” or “confirmatory bias”:  Our tendency to search for data that fit our preconceptions, or to perceive reality in ways that confirm our views. It is a bias through inferences that validate our impressions, by finding and giving more credence to evidence that confirms our beliefs, or in interpreting ambiguity, while ignoring or giving less credence to contradictory facts. Consequently, those who are more prone to this bias hold on to their positions even when faced with contrary evidence.

Consider how this affects the above economic problems. Also, how these seemingly separate problems may be so intertwined that one can’t be fixed without fixing the other/s as well. Take electricity supply: Policies were revised in December 2009 for developing so-called mega power projects (MPPs) for generating electricity.  Projects with a minimum capacity depending on location and energy source, e.g., thermal plants of 1,000 megawatt (MW) in most states, or of 700 MW in some states, or hydel plants of 500 MW in some states and 350 MW in others, designated as MPPs were given concessions, such as reduced customs duties, to facilitate viability at reasonable tariffs.1 India was on a roll, with excellent growth prospects. Arranging long-term power purchase agreements (PPAs) seemed easy at the time.Things stayed on track for a few months, and then came the crises, namely, the 2G scam, followed by the coal scam.The sudden cancellation of licences stalled momentum, and subsequent weakness in  global markets further hobbled the recovery. As of March 2017, 25 such projects with a capacity of 31 gigawatts, which were to establish PPAs in the prescribed period of 36 months, then extended in 2014 with other concessions to 60 months, were stalled because of adverse developments (see chart ). 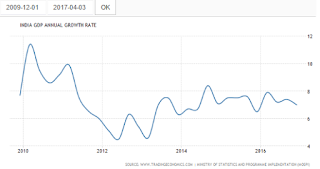 
This was because the poor financial condition of state electricity distribution companies combined with lacklustre economic growth resulted in reduced effective demand and, therefore, oversupply. Spot purchases from electricity exchanges fed by plants running below capacity became more attractive than long-term PPAs. Regulatory delays and changes in costs, such as large additional imposts by foreign countries on coal, followed more recently by the collapse of construction and real estate in November 2016, accentuated the problem. The MPP policies were revised again on March 31, 2017, extending the deadline for PPAs to 120 months, with the funds released having to pay down bank dues.

According to a November 2016 report by Ernst & Young, while infrastructure received 14 per cent of bank loans in India, its share of restructured loans was over a third, at 34.4 per cent, of which the power sector accounted for the largest share at 20.9 per cent.2 This is one aspect of especially public sector banks’ non-performing assets or loans (NPAs/NPLs). Industry-wise, iron and steel were the most leveraged as of March 2016, followed by construction, power, telecom, and transport, all facing structural problems.

For instance, telecom operators incurred considerable debt for spectrum purchases, and face declining revenues while having to invest further in networks besides servicing debt.  Policymakers, courts, and misinformed citizens have difficulty in accepting that auction fees paid by operators could have been invested instead in broadband networks and services, clearing away those stressed loans through earnings, and providing far more government revenues (see http://organizing-india.blogspot.in/2016/04/breakthroughs-needed-for-digital-india.html). 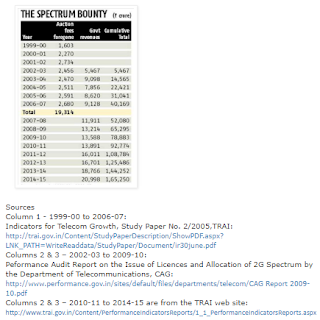 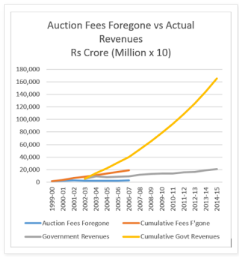 “In hindsight, a combination of policies, market structure/competition, and technology resulted in enormous growth, much higher government collections, and tremendous user benefits. A key impetus was the adoption of the high-volume-low-margin approach [for government revenues] of Henry Ford's "Model-T" strategy. This principle is an essential ingredient for achieving Digital India.”
From: Connectivity: Let's Apply What We Know - March 3, 2016
http://organizing-india.blogspot.in/2016/03/connectivity-lets-apply-what-we-know.html

There are differing views of these circumstances. One is that stressed projects lack merit because they represent crony capitalism. Where there is prima facie corruption, perpetrators must suffer the consequences, but surely not the majority of stressed projects in infrastructure, which is the essential facilitator of economic activity. Surely, genuine changes in conditions require a problem-solving, cash-flow oriented solution, and not the reclassification through tightened standards in stressed conditions that led to NPAs doubling between September 2015 and September 2016.

Another often expressed view is that bankers lack the requisite skills in assessing projects, or working out repayments.  While this could be true of the odd case of poor evaluation and the irrationality of herd mentality, most bankers are well-versed in evaluating cash flows, but no skills can forestall unforeseen adverse developments. Yet another view is that corporates should suffer the consequences for their estimation errors, but this is precisely why contracts have “material adverse change” or “force majeure” clauses, whereby contracts can be rescinded if there are unexpected adverse changes. Good projects can become unviable because of unforeseen events beyond corporate control, such as a decline in demand (e.g., because construction, manufacturing, and communications sectors all slowed),or if costs and tariffs are outside the range considered reasonable and used at the time of evaluation, or of scope (such as cancelled licences, or regulatory delays).

Therefore, it behoves policymakers to recognise that the essential linkage and measure in the system comprising enterprises, sectors, banks and the state of debt and its recovery is through cash flows.  Closing down stressed assets is not a cure, nor are distress sales when a market is down. Assets have to be “turned around” by managing cash flows. Ignoring the benefits of build-and-earn by taking upfront auction fees, for example, can’t possibly be for the public benefit, especially in a developing economy. Effective policies ease legitimate flows (within the social context of equitable taxation), and minimising obstacles and delays yields maximum productivity of capital.