This new year brings with it uncertainties amidst the push for cashlessness. Without going into the demerits or otherwise, some clarity on a road map to go forward from where we are might help with realistic planning to manage our way out of this situation.


Cashless transactions need ubiquitous connectivity, which we don’t have.  Without it, the goal is simply unfeasible. Better to recognise this now, rather than act out elaborate charades, resulting in avoidable economic hardship and social ructions.  Connectivity needs effective, efficient communication links at a reasonable cost. These call for realistic objectives and solid implementation, not bluster and unrealistic goals or plans, such as fibre-optic networks everywhere, payment systems on a hastily assembled database riddled with imposters, or insufficient security and privacy.


What’s required?
The need is for internet connectivity using fibre backbones, extending to users through aggregation networks that are mostly wireless. The chances of establishing these networks increase if political parties and government agencies take concerted action on how to do so. This is necessary for two reasons. One is that our present network development and spectrum policies do not facilitate achieving universal broadband, especially in areas with lower commercial potential than prosperous urban clusters. The second is the legacy of network development with entrenched rivalries and perceived ways of managing spectrum, and the aftermath of the spectrum scam.  These constrain society’s collective ability to configure solutions for connectivity, as opposed to the biased or limited perceptions of stakeholder groups such as the government, the judiciary, the citizenry, and industry (comprising service providers and equipment suppliers). Government agencies also have divergent agenda, e.g., the Telecom Regulatory Authority of India (Trai) is responsible for recommending spectrum use, the Department of Telecommunications/Ministry of Communications has licensing authority and runs the state-owned operators, the Ministry of Information and Broadcasting holds certain spectrum bands, the Ministry of Defence and government agencies hold other bands, and the Ministry of Electronics and Information Technology is responsible (without the authority) for providing broadband. Hence, the need for a convergent approach, as effected partially for electricity supply, from coal mining through transportation to distribution (although other sectors – hydel, hydrocarbons and nuclear – are yet to be similarly linked).


What needs doing
Radical changes such as pooling and sharing network infrastructure have to be considered for widespread connectivity. Such changes can’t happen with confrontation and mistrust, but only with trust and cooperation. This may seem naïve, but the ruling party leadership sets the tone for cooperation, as does the administrative leadership. Their pitch has to be sufficiently persuasive to induce diverse stakeholders – other political leaders, the judiciary, the citizenry who want industry to pay their pound of flesh while getting good services that are priced very low, and the operators, who have huge investments in networks and spectrum rights – to consider sharing equipment, and to work out worthwhile terms for everyone.

Currently, contending political parties pursuing selfish objectives as antagonists settle at the lowest achievable equilibrium. To understand why, consider two parties, A and B, with objectives along the horizontal X axis for A and the vertical Y axis for B in the chart. 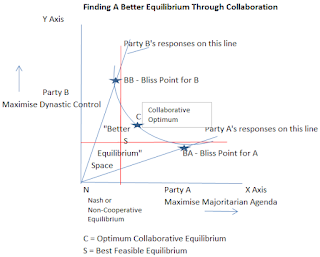 When parties pursue conflicting interests confrontationally, they end up at N or Nash Equilibrium, where neither can improve their position without the other’s concurrence.  Assume A has the objective of maximising a majoritarian agenda, while B seeks to maximise dynastic control of its leadership positions. This holds for any objectives that are unrelated (orthogonal). If their objectives are along the same dimension — say, control of the Centre or of the same states, there can be no accommodation: one wins what the other loses. This has happened so far, as parties are periodically voted in and then out by a disenchanted electorate. But if they accommodate, their equilibrium could move up to S, the “Best Feasible Equilibrium” point, where the acceptable limits of their respective objectives meet. (For more details, see: “Tata’s Corus Buy: A Game Theory Analysis”, organizing-india.blogspot.in, November 2, 2006, and "India’s Access To Nuclear Fuel & Technology", April 3, )
2008.)

Imagine waking up to find that instead of the usual confrontation and vitriol, a different and gracious protocol awaits you. One of harmonious interaction marked by accommodation and courtesy, despite nature being red in tooth and claw. Utopian?  Perhaps. But not if the powers that be realise that the way out of the cashless crisis is to seek benefits for everyone, instead of self-destructing by chasing chimera such as pure cashlessness or other unrealistic goals.  Instead, they could give people what they need but don’t have: ubiquitous communications  infrastructure that facilitates all activities (not just cashless transactions), and a more secure, well-ordered environment for pursuing their livelihoods and well-being. Policy decisions to share network infrastructure would be the start of this journey.


We can then break out of the impasse created by legacy communications policies and posturing, e.g., which party was responsible for what scam, the popular obsession with high auction prices for spectrum while wanting cheaper services, and operators committed to cornering spectrum.


Once the leadership collaborates, they’ll find that communications services delivery will be much improved by sharing capacity and coordination. This would enable other stakeholders – private sector operators, the citizenry, the judiciary – to accept that everyone gains from cooperative access to and delivery of communications services, provided adequate profits are generated and shared equitably. This will help in accepting a more rational, pay-for-use policy on the lines of highways, metro rail, or oil pipeline usage, and recognise the financial infeasibility of having auctions as well as funds for investments in networks for countrywide broadband access.


Government and stakeholders can then work together to develop solutions that are fair and practical. For instance, one or more consortium/s of operators with the government as a co-investor in each (on the lines of Singapore’s OpenNet) can co-own the network and coordinate for most effective and efficient service delivery.  Earnings from spectrum usage can be collected by the government once the networks are commercially viable, as for developing any other infrastructure. Such collections are likely to exceed the auction fees foregone, as with revenue sharing from licence fees.
Shyam Ponappa at gmail dot com
Posted by Praxis at 7:36 AM No comments: