Extend The Tax-Cut Logic To Infrastructure

A judicious lowering of input costs can increase productivity.

With the tax cuts, it is as though the government suddenly stumbled on the wisdom of deferred gratification. The government line is that tax cuts will give much more in the long run than revenue lost, and we heartily agree. Yet, this logic isn’t extended to personal and consumer taxes. Nor is it applied to essential inputs to infrastructure to reduce costs further, specifically for radio frequency spectrum for communications, and for coal for electricity.
The cut in corporate taxes is brilliant. A significant step in responsive governance, and so utterly overdue. No ifs and only a few buts, which one hopes influencers and decision makers will consider and act on in short order. The concerns are about interrelated processes (for completeness in end-to-end design and execution, upping the odds of delivery and achievement), and symmetry on the demand side, without which we cannot get optimal results.
Many have expressed reservations about the tax cuts instead of incentives to consumers to revive demand. Some experts have cited the failure of such reforms globally in reviving growth. While these concerns may have merit, the key criteria in such comparisons are whether the circumstances are comparable, or too different. For instance, are the markets large, with scope for expansion, or small, less diverse, or more saturated; what is the level of momentum or inertia? And so on.

While stock markets were euphoric, experts have been divided in their opinion, because demand has been subdued and these are supply-side incentives. Another reason is that companies paying high taxes gain the most, while the majority don’t gain directly in profits. Profits will rise for the highest taxpayers by 11 per cent, while large FMCG companies such as HUL, ITC, and Nestle will increase profits by 9 per cent (Moneycontrol). Profits for IT and pharmaceutical companies are estimated to increase by 5 to 6 per cent, and existing automobile manufacturers are unlikely to benefit directly during this slowdown, although new ones will pay 17 per cent tax, as in Singapore. However, a number of auto component manufacturers who paid taxes at 29-35 per cent will get increased profits of 4 to 10 per cent, and Icra expects localisation to increase. Crisil’s study of nearly 1,000 companies in 80 sectors estimated that profits would increase by nearly Rs 37,000 crore, while the State Bank of India, based on about 3,500 companies (and this newspaper based on 490 companies), estimated increased profits of about Rs 45,000 crore, and India Ratings of Rs 60,000 crore. These profits could result in price cuts, spurring demand.
However, India’s tax rates are still not especially competitive. A recent article in these pages showed that effective tax rates in India are still among the highest after including tax on dividends and share buyback, at 46.8 per cent for existing manufacturers, and 41.1 per cent for new manufacturers. By contrast, comparable rates in Vietnam and Thailand are 20 per cent, and in Indonesia and China, 25 per cent. For details, see chart below. 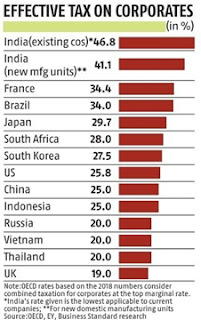 Add costs for improving infrastructure (stable electricity supply; water, sewerage, and waste management; communications; transport and logistics), and law and or­der, and that’s how much must be done for our supply side to be really competitive. Then, there’s demand, which needs a stable, functioning GST system with lower rates, and income tax cuts to match.
If time, energy and money were channelled into these areas instead of events and jamborees, we could be further along in unleashing our potential. Thereafter, skilling and education applied to systematic development could take us even further.
Tax-cuts & infrastructure
It is this episodic intervention without logical consistency or integrated, step-by-step convergence focussed on delivery that results in our disjointed infrastructure, and this infrastructure is the very foundation for our productivity and wellbeing. Apart from apparent lack of systems thinking, detailed process flows,1 and project management, there is also confusion between free-market ideas and the application of any form of industrial policy, because of the backlash from past mistakes with dirigisme and socialist planning.
This is where we have to leap across the chasm, and either “get it” as with the corporate tax cuts, or fail.
Digitisation as development priority
Our broadband and digitisation efforts are disappointingly ineffective.
This is one instance where we should consider adopting China’s approach in developing broadband (except for state ownership) as a priority, driven by a strong industrial policy, “to play a leading strategic economic role and to deliver economic benefits to the Chinese people”.2 India professes similar objectives, but without the detailed planning to adopt broadband and to aid manufacturing. There are expectations about e-services without detailed, step-by-step proposals. In China the broadband network was formally recognised as public infrastructure and incorporated into government plans, and spectrum was not auctioned. The backbone is dominated by state ownership, and private investment in broadband for access in buildings and public facilities (airports, subways, highways) has to ensure fair access to all service providers as a matter of policy.
Two other developments have a bearing on this. One is the move to share spectrum and infrastructure. In July, the UK allowed public access to three bands assigned to businesses, organisations, and mobile companies for use by anyone at nominal cost.3 Another is the deteriorating state of BSNL and MTNL with their 185,000 employees, before they go entirely Air India’s way. As with tax cuts, the government can, after consultation and with participation from the private sector:
Our interests would be well served at much lower cost by extending this approach to all resources for our collective benefit.
shyamponappa@gmail.com
1: For a good example applied to Aadhaar/PDS, see: Subhashish Bhadra and Varad Pande