Taking a cue from Huawei.


Huawei has an awe-inspiring record of drive, perseverance, fortuitous circumstances, good strategy, execution, and success. A Chinese communications company founded in 1987 in Shenzhen by a former army engineer, Ren Zhengfei, Huawei is now a legend. By 2012, it overtook industry leader Ericsson in global revenues. In 2017, its revenues were over $90 billion, two-thirds from outside China.  It also has a significant and growing presence in India. How did they do it?
Part of Huawei’s mystique stems from its outstanding founder and its driven work culture. This may be unique and difficult to replicate, but it is a byword for hard-charging Chinese high-tech. A meme that epitomises the culture is “9-9-6” — that is, for 9:00 am to 9:00 pm, 6 days a week. Can factors driving its success be adopted at the policy level and in enterprises in a democracy?
My previous column addressed the hollowing out of our manufacturing and other abilities. My suggestion is to replace obstructive policies with others that facilitate building infrastructure and local capacity, especially in growth areas. The example of Huawei provides a pointer. Perhaps some of what we learn can be applied at the governmental and the corporate levels.
Reports suggest these key factors in its success:
— Strong leadership with a sense of purpose: A customer-first attitude. There’s an anecdote of the founder being willing to meet any customer, but ignoring a potential investor by delegating to a colleague a meeting with a Morgan Stanley team, led by Chief Economist Stephen Roach.
— Broad employee ownership: In 2014, 84,000 employees out of 150,000 owned stock along with the founder, who owned only 1.4 per cent.2 They share an understanding that while an IPO would enrich some, the majority would lose their motivation. The essential requirements are hard work and dedication.
— Government support: Huawei grew revenues by building market share in China to become a national champion, then got support from the China Development Bank. Initially for $10 billion, it is now $30 billion.3 Building networks in Africa and Latin America, and low prices helped win deals in Europe. Mr Ren himself has said that without policy support, Huawei would not exist.
— Its unique culture and organisation: From inception, the founder was passionate about management, and about adapting methods and organisation. For instance, Huawei devised a top management model of a rotating CEO among three top executives, each of whom leads for six months, modelled on a flight of geese that change their order in arrowhead formation.4 Mr Ren is the mentor and coach. In March 2018 there was a change to a rotating Chairman position.
(The founder’s daughter, Meng Wanzhou (aka Sabrina Meng) is the Chief Financial Officer, and holds one of four vice-chair positions. His son Ren Ping works for a subsidiary providing reservations and trade show support.)
Another instance is Huawei’s Integrated Financial Services transformation program, which Ms Meng led since 2007. It was an eight-year partnership program between Huawei and IBM to develop data systems and resource allocation rules, operations, process optimisation, and internal controls.

— Huawei also emphasises “the power of thinking”. Executives are urged to read beyond their domains, and books are everywhere.
These factors enable Huawei to solve problems for clients in diverse situations. Examples:
— In its early days, networks were at risk from rats gnawing through circuitry in desert and rural areas in China. Multinational vendors did not consider this their problem and left it to their customers. Huawei, by contrast, treated it as their own problem, and developed sturdier equipment and materials such as chew-proof wires. This experience later helped gain large accounts in the Middle East where customers faced similar problems.
— Other extreme environmental conditions have been addressed, such as base stations installed at high altitudes (at 6,500 metres on Mt Everest), or in the Arctic. These experiences helped a dedicated and committed workforce gain more clients. For instance, when expanding their 3G market in Europe, Huawei found that clients expected “base stations to be more compact, easier to install, greener, and more energy efficient, while offering wider coverage”. To cater to these needs, Huawei developed distributed base stations that could handle both large and small private networks, making them cheaper to deploy, which became popular with European carriers.
— The employee-ownership arrangement and associated dedication enable planning for the long term, as with the Chinese government. Huawei plans for 10 years, whereas competitors have to contend with quarterly financial considerations.1
Carriers buying Huawei network equipment get significant discounts in smartphones. Focusing on new technology not controlled by the giants of 3G such as Qualcomm, Ericsson, and Nokia, enabled Huawei to develop 4G, which is much faster and ideally suited for updating-apps, to the point that it competes with Samsung and Apple. Undercutting competitors has enabled it to sell to carriers, and its depth of products and technology has enabled it to meet customer needs, displacing competitors.
Huawei’s R&D Centre in Bangalore established in 1999 is its largest outside China, and it has offshore Global Network Operating Centres in Gurgaon and Bangalore, besides Romania and Nigeria. These GNOCs run networks not only in India but across the globe for a number of operators, offering managed network services integrating a range of equipment at low cost. With its market strength, depth of products, and access to funds, Huawei is likely to control network services in India and much of the world from now on through the 5G evolution cycle.
The only way for competition other than in-house NOCs in India is if the Government of India develops end-to-end supportive policies, transcends election cycles, and sponsors a consortium comprising a major transnational anchor, a system integrator, and local design and production wherever technological opportunities arise.

Located within Huawei’s Research and Development (R&D) campus in Bengaluru, the GSC is currently home to over 1,000 engineers, network operations specialists and support staff. 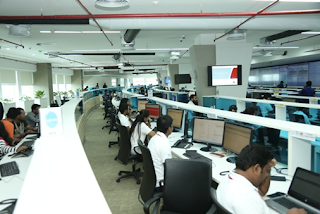